Remembering past, knowing the present 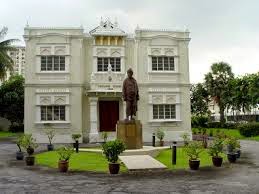 A foreigner, clearly with the tune stuck in his head, shook his head as his female companion was mesmerised with the colourful bangles displayed at a nearby stall.

The smell of fresh apam completes the adventure of senses while walking along Jalan Tun Sambanthan in Brickfields on Monday.

Locals took advantage of the Aidiladha break to prepare for Deepavali. As for the tourists, it was a natural destination.

It is ‘big’ in history — which sadly many fail to appreciate.

Once referred by the locals as Batu Limabelas (15th mile), its humble beginnings was thanks to Chinese Kapitan Yap Ah Loy. Born Yap Tet Loy, the China migrant of Hakka descent, who was also known as Yap Moa Lan, played an instrumental role in developing Kuala Lumpur and gave it a new look — literally.

Kuala Lumpur was once a jungle, with wooden houses accompanied by attap roofs scattered everywhere. A major fire in 1881 and severe flooding prompted British Resident in Selangor Frank Swettenham to instruct buildings be constructed with bricks.

Yap bought a large piece of land and established a bricks kiln. That is how, as historians and academicians say, Brickfields got its name. The act of supplying bricks introduced a new dimension to the architecture of buildings in Kuala Lumpur. As documented in the paper ‘The History of Yap Ah Loy’ produced by Kongsi NetWorks: “The brickworks is now gone, but nevertheless had left its mark on the outskirts of today’s Kuala Lumpur known as Brickfields.”

As Brickfields undergoes massive redevelopment — a spanking new green building in the form of Menara Shell, a massive shopping mall called Nu Sentral and a fancy fountain — reminiscences of its past still linger through the Buddhist Maha Vihara temple and the Vivekananda Ashram.

The watt was founded in 1894 by the Sasana Abhiwurdhi Wardhana Society, the oldest registered Buddhist Society in the Klang Valley.

The Vivekananda Ashram was named after the great Indian spiritual leader Swami Vivekananda, who visited Malaya in June 1893. The 110-year-old building was said to be part of the Ramakrishna Missions and has been a venue for a variety of arts and cultural programmes.

There were threats to demolish in 2004, but it was later rightfully declared a heritage building.
“But I wish more would be done to maintain it. It is a part of our nation’s history ... it is what is left of the old Brickfields,” said M. Paramasivam, 58.

A yoga instructor, Paramasivam, also known as Brother Param, has spent some 25 years of his life at the Ashram.

“I was a yoga student 25 years ago and today I am an instructor. There are several activities such as Indian cultural music sessions and meditation but visitors are only allowed in during these sessions.”
Paramasivam remains fascinated with the architecture of the building.

“I even got a contractor to come over to see the design of the Ashram before renovating my house.”
As paint peels off, windows cracked and leaking roofs, Paramasivam hoped more will be done to maintain the place.

“I wish people will appreciate our old buildings, including this Ashram.”

“Brickfields was peaceful then. I could park my car anywhere!” Heng exclaimed.

“Now it is so messed up. It became inconvenient for my customers due to heavy traffic and inadequate parking. I had to move out.”

“When you say banana leaf (rice) or kari kepala ikan (fish head curry), it had to be in Brickfields. The Pines had good food too. Sadly, it is not like what it used to be.”

He said salesmen used to stay at Lido Hotel or Peking Hotel before they got around selling their goods the following day. Another landmark in the area was the Lido theatre near the YMCA building. Now a bank sits on the spot.

Brickfields, like many parts of the country, has been robbed of its history. Football fields, once graced by football legends including Datuk Soh Chin Aun and Datuk Santokh Singh, have vanished.

Sporting clubs including the Selangor Chinese Recreation Club and Tamil Physical and Cultural Association (set up in 1911) no longer exist there.

Development is necessary. But spare a thought for our fascinating past. Just like many parts of the country, such heritage must be salvaged and preserved to understand our roots better.

As JM Gullick wrote in his book ‘Old Kuala Lumpur’: “This is the Kuala Lumpur of the modern age. If its citizen groan a little at some of its features, this is their lifestyle. The city could not be the capital of a prosperous and progressive nation state in any other way.

“All that the historians can suggest – and this is the theme of these pages – is that the modern age should understand that it has been the heir to a community which left its legacy. Even now it is there to be seen in places, and where it can be preserved, it should be cherished. This is not mere nostalgia.

“There are authorities such as the Dewan Bandaraya (City Hall) and bodies such as the Badan Warisan Malaysia (Heritage of Malaysia Trust) which have done good work to conserve and explain the relics of the past to the citizens and the visitors of these days. May it continue so.”