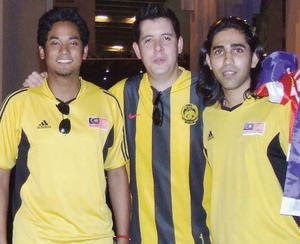 It has been a long time since I've spoken to Khairy Jamaluddin.

Unlike many who seem to have a bone to pick with him, I have no problems with Khairy. Never did.

For the simple fact that even when he was critised in his professional capacity, he didn't flip. Mind you, he could have pulled the "I'm the son-in-law of the PM" line when Tun Abdullah Badawi was at the top seat then.

But he never did - at least where I'm concerned.

But I do know some people who are not even related to the PM threaten by using the Premier's name or the First Lady's name like no one's business. Tsk tsk.

That aside, I know for a fact that Khairy is pretty busy with the current by-elections in Galas (Kelantan) and Batu Sapi (Sabah). Out of respect I have not written in the Malay Mail that several MyTeam players, including Stanley Bernard, have yet to received their wages.

You see YB, I truly understand that the timing is not on - politically. It is not my intention to mess anything or anyone up. I'm not a fan of politics and I'm no politician.

But I do know some of the players have received full payment just before the Hari Raya holidays. Now I hope you'd make this Deepavali - regardless they celebrate or not - special to those who have yet to receive their wages.

Best of luck in your political career and I still say that you would have been a better sports administrator - or even a sports minister - than some individuals I know.

At least you have the b@ll$ to speak your mind - regardless whether I agree with you or otherwise.

HD says: I ain't fishing for votes. Just trying to help the players get what they deserve. Period.