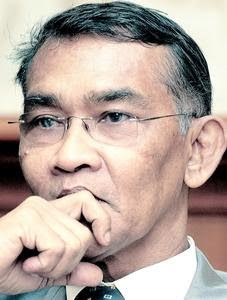 FA of Malaysia tried to clear the air by justifying the action taken against Kelantan coach B.Satianathan ahead of the Malaysia Cup final between Kelantan and Negri Sembilan on Saturday. Read it here, here and here.

Its secretary general Datuk Azzudin Ahmad (pic) spoke on the matter at the National Stadium in Bukit Jalil yesterday.


"The disciplinary committee chairman Datuk Taufik (Razak) decided to hold a meeting on Oct 21 at 10am. Satianathan and (T-Team coach)Che Ku Marzuki (Che Ku Mohd Noor) case appeared and the committee decided to hand them a six months suspension and fines of RM2,000 each. This was based on the written explanation by both coaches.
Unlike Reduan’s (Abdullah) case, he didn’t write an explanation thus he faced the disciplinary board. The board felt that the contents of the letter written by Satianathan and Che Ku Marzuki were sufficient.
The board felt both coaches spoke against FAM policy matters...something all coaches and players should understand.
Once a decision is made, an individual has the right to appeal within 14 days from the day the sentence was meted out and if the appeal adhered to the stipulated regulations, it will be forwarded to the Appeal's Committee chairman.
Why the Media was not informed (of this decision)? The Exco has endorsed that member states should be notified of decisions made by the disciplinary board before going to the Media.
FAM is willing to make an exception for Kelantan to play (in the final) as there are assistant coaches (even not being A-licensed). Note: This was said prior reading Satianathan’s appeal later in the evening.
On the issue of accreditation cards to Media personnel, I would like to deny that FAM apply selective prosecution when issuing such passes. We realise we must be close to the Media. I have checked with our Media department and no application has been rejected.
As for Khairul Anuar Baharom (head butting T-Team’s Haris Safwan), the board is in the midst of getting information including tv footages. I saw it myself and it was very clear.
This is not Azzudin’s committee. Azzudin is just your obedient servant. I don’t decide on anything as I have no authority to do so.”

HD says: You be the judge.