People are so fickle 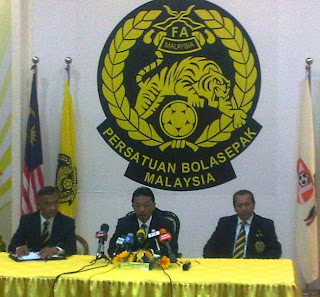 That is what some people may say about the FA of Malaysia (FAM).

Judging from the tone of FAM deputy president Tengku Abdullah Sultan Ahmad Shah, the introduction of foriegners in the M-League will not be anytime soon.

Earlier, it was projected that the domestic scene could see the return of imports by the 2012 season.

Perhaps Tengku Abdullah is being careful. As he said; "There are many factors to consider and an answer will be only be made by next year."

I'm eagerly waiting to see what my fellow peers will have to say in their articles tomorrow.

The picture was taken during the press conference after the Exco meeting at Wisma FAM this afternoon.

HD says: Kevin Devine's People are so Fickle is quite a catchy tune.