Malaysia Cup - Who will make the cut? 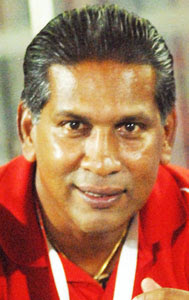 Who will make it to the final of the 2010 Malaysia Cup?

Defending champions Negri Sembilan were stunned 1-0 by Johor FC in the first leg of the semi finals and now have to work doubly hard to overturn their fortunes in the return leg at the JCorp Stadium tomorrow.

Kelantan coach B.Satianathan (pic) will wear an even bigger smile if his team - which will see the return of striker Norshahrul Idlan Talaha after serving a two-match ban - defeats Kedah in Kota Baru.

Kedah held the Red Warriors to a 0-0 draw in the first leg.

Kelantan are going for the kill, according to Devinder Singh of the NST while Kosmo reports that Kedah is optimistic of upstaging Kelantan.

Could Negri and Kelantan make the cut or could Kedah and Johor FC stun the fans and book a date with each other in the final scheduled at the National Stadium in Bukit Jalil next Saturday?