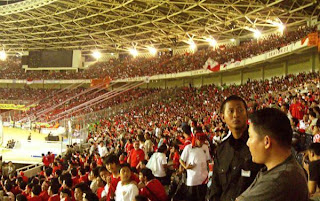 The sea of Red may not be seen when Indonesia hosts Malaysia in the AFF Suzuki Cup at the Bung Karno stadium in Jakarta on Dec 1.

As published in today's Mailsports, sources close to the author said that the Indonesian police are not taking anything for granted no thanks to the 'tensed' relations between both nations.

Thus, the match could be played in an empty stadium. It remains unclear if it only involves the Indonesia-Malaysia match or all of Malaysia's matches in Jakarta.

Hopefully, the organisers will manage a good outcome for the love of football.