Malaysia loses to Taiwan - in hockey! (and some AFF updates) 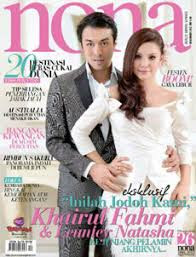 While some of us may still be reeling from the national football team's 1-1 draw against Bangladesh, here's another shocker in the sports scene.

The Malaysian hockey team went down 3-2 to Taiwan in the 4th AHF Indoor tournament in Thailand.

Read 'What a disgrace' for the full story.

Apex to tie the knot on Dec 28
National goalkeeper Khairul Fahmi Che Mat (pic) had, during a press conference yesterday, revealed his marriage plans with  Nur Eilunie Natasha Nazri or better known as Leuniey Natasha in Pasir Pekan, Tumpat, Kelantan on Dec 28. Shouldn't such an announcement be made after the AFF Cup?

No thank you coach
Terengganu's Zubir Azmi and Nik Shahrul Azim from Kelantan will not be joining Ong Kim Swee's Harimau Muda team next season.

It is believed that Zubir is comfortable staying put in Kuala Terengganu while Nik Shahrul is set to play an important role in protecting the Red Warrior's fort as experienced defender S.Subramaniam is still out of action.