All suited up astride a bike for a good cause 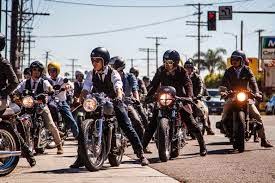 KUALA LUMPUR — It will not be your typical weekend ride.

More than 300 riders, dressed in suits and bow-ties, are set to make plenty of “noise” in Kuala Lumpur in conjunction with the annual Distinguished Gentleman’s Ride 2014 on September 28.

The worldwide event, which started in 2012, is to promote men’s health and raise funds for research to fight prostate cancer.

The organiser of the Malaysian chapter, Kamarul Azahar Azman, 30, said the event aimed to promote a positive outlook of men on motorcycles and to help raise money for a noble cause.

“We have received strong support since the event’s inception we are confident the numbers will keep on growing.”

The participants will assemble at KL Tower before riding to the National Museum and KLCC and ending their journey at Hard Rock Cafe, Kuala Lumpur.

“I know it can get really hot wearing a full suit in our weather but then again, it is not often one gets to dress up in tailored suits and grow moustaches to be part of a ride and all for a good cause,” said Kamarul.

The ride is limited to certain motorcycles — cafe racers, bobbers, classics, flat trackers and customised motorcycles — ranging from from old school Lambrettas to the likes of a customised Harley Davidson or Triumph Bonneville.

“We know many out there would want to join the ride but certain limitations were put in place by the worldwide organisers to prevent the local organisers and participants running into any trouble,” he said.

The ride was inspired by a photo of Mad Men’s Don Draper astride a classic motorcycle and donning a fine suit.

The inaugural rideout saw more than 2,500 riders across 64 cities worldwide.

This year, more than 20,000 participants from 220 cities are expected to ride in their finest outfits on the same day.

The funds raised will be channelled to the Prostate Cancer Foundation in the United Kingdom, United States and Australia and men’s health charity organisations in Asia.

Those who wish to sign up for the ride or contribute may do so at www.gentlemansride.com.