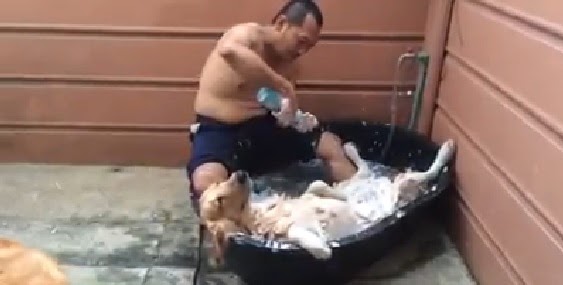 MY name is Fluffy Singh. Contrary to popular belief, my diet does not comprise of chapati or ghee, although I do enjoy the occasional yogurt.

I will turn six come January 13. That’s 42 human years. People refer to me as a Golden Retriever but I don’t really care. I’m not ‘racist’. Regardless of my breed, colour or size, I am a dog. Period.

But this is not about me. It is about my fellow four-legged furry friends and other animals out there.

Humans have a wide range of vocabulary when referring to us – from “so cute” to “get lost”. We are treated like second, no wait, third class citizens. The laws remain unfair. No one fights for our rights but for a small section of the society. Their voices too remain unheard most of the time.

Some of you claim to sympathise with us by being vocal on Facebook or Twitter. But you quickly move on. As they say, barking dogs never bite.

It is difficult for us to pen our thoughts as laptops and smart phones do not cater for our paws.

I’m struggling to write this – not only to construct sentences but to deal with emotions as I recap the list of inhumane things you humans have done to my brothers and sisters.

• In 2011, a toy poodle Sushi was clearly abused by one of your kind who wanted to train it to stand on its hind legs. The video went viral on Facebook.

• In 2012, 30 cats were left unattended at a pet hotel in Damansara Damai, resulting in them dehydrated, starving and covered in faeces. Eight eventually died. The High Court had sentenced the owners to three months jail and RM6,000 fine each. A cat has nine lives, but the jail time and fines would not bring the eight back.

• 14 pygmy elephants were found dead at a forest reserve near Tawau, Sabah in January 2013. They were severely poisoned as chemical analysis by the Queensland Biosecurity Sciences Laboratory, Department of Agriculture, Fisheries and Forestry in Australia showed the remains contained high levels of heavy metal.

• A Malayan sun bear and an Arabian stallion at the Malacca Zoo and Night Safari were poisoned by a disgruntled man February last year.

• Gruesome videos of how dog catchers, contracted by local councils, nab dogs, some dying in the process.

• A cat rescued by Zero Strays Miri had a marble stuck inside its eye earlier this year.

• Man shoots a dog with a bow and arrow in May.

• Pictures of man placing a dog in a washing machine, claiming it is the best way to clean it, goes viral recently.

• Malay Mail had on Monday reported about a viral video showing a young boy killing a puppy viciously.

The list can go on. I’m sure you have read many more.

Why do you need us to do tricks? To impress your friends? Do you train your child to roll over or fetch?

We’re not characters in a circus. You humans, through your funny politicians, make better entertainers than us animals.

You can debate until the cows come home but without strict enforcement it will be just mere talk. What has happened to the Animal Welfare Bill, I wonder?

Is there any form of education? You humans claim to be religious but see no harm in hurting another living being.

We are restricted in most places. Where is the freedom?

Then again you discriminate against your own kind, especially the handicapped. Ask Malaysia’s first trained guide dog Lashawn and his visually impaired friend Steven Chan and they will tell you how frustrating it is to get around the Klang Valley.

Thankfully, we have Mohd Kamil Affendy Hashim or better known as Eddie. He is a taxi driver from Setapak who is willing to ferry dogs or cats from one destination to another. And he’s pretty cool about it too.

If a dog bites a man or a cat scratches a child, you have plenty to say. Do the victims admit they had provoked the animals?

But what about our furry friends that are knocked down or brutally murdered daily? You keep silent about it.

Unlike you humans who merely tolerate each other, we animals respect each other. We respect territories. We know our boundaries.

We deserve a place in this society. We have every right to live as you do. We don’t have high expectations or are materialistic. As long as we have enough of food and space to run around, we are happy. Some of us are lucky enough to get a nice scrub on our bellies.

To the lawmakers, please hear our barks and meows.

Many of us do not live long and we would like to enjoy every second of it.
Please find it in your hearts to love us … because no matter what, we still love you.

Fluffy is an obedient and loving dog who stays with Malay Mail editor (investigations and special projects) Haresh Deol. He can be reached through Haresh at haresh@mmail.com.my or on Twitter @HareshDeol
abuse animal cat dog facebook fluffy singh