KUALA LUMPUR — The Royal Malaysian Customs Department has embarked on a full-scale exercise to weed out bad officers including a move to rotate personnel in high risk areas such as entry and exit points in the country.

Sources said dozens of officers have been implicated in illegal activities since the recent bust-up of the billion-ringgit cigarette and liquor syndicate by the Malaysian Anti-Corruption Commission (MACC). 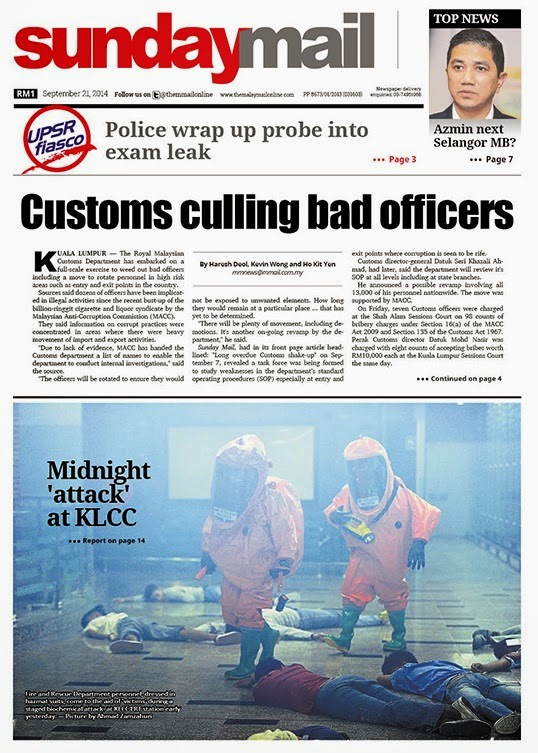 They said information on corrupt practices were concentrated in areas where there were heavy movement of import and export activities.

"Due to lack of evidence, MACC has handed the Customs department a list of names to enable the department to conduct internal investigations," said the source.

"The officers will be rotated to ensure they would not be exposed to unwanted elements. How long they would remain at a particular place ... that has yet to be determined.

"There will be plenty of movement, including demotions. It's another on-going revamp by the department," he said.

Sunday Mail, had in its front page article headlined: "Long overdue Customs shake-up" on September 7, revealed a task force was being formed to study weaknesses in the department’s standard operating procedures (SOP) especially at entry and exit points where corruption is seen to be rife.

Customs director-general Datuk Seri Khazali Ahmad, had later, said the department will review it's SOP at all levels including at state branches.

He announced a possible revamp involving all 13,000 of his personnel nationwide. The move was supported by MACC.

On Friday, seven Customs officers were charged at the Shah Alam Sessions Court on 98 counts of bribery charges under Section 16(a) of the MACC Act 2009 and Section 135 of the Customs Act 1967. Perak Customs director Datuk Mohd Nasir was charged with eight counts of accepting bribes worth RM10,000 each at the Kuala Lumpur Sessions Court the same day.

All eight claimed trial and posted bail but their passports were confiscated.

“We will take all the necessary action against the officers charged in court,” said Khazali.

“The officers have yet to be suspended as we are awaiting official documentation over the matter.”
Four Customs officers arrested earlier were released on police bail. It remains unclear if they were reassigned to desk duties.

“Just because they were taken in for questioning to facilitate investigations does not mean they are guilty,” Khazali said.

Transparency International Malaysia (TI-M) president Datuk Akhbar Satar said the government should revise the Customs’ standard operating procedures (SOP) and have a three- to five-year job rotation system for those in “high-risk” positions.

“Concurrently, they should take action against those involved in corruption to create an awareness of the severity of their offences,” he said.

Akhbar said the unravelling of the scandals was embarrassing but they served a good lesson.

“This is a good way to clean up corruption from within,” he said.
arrests MACC Malaysian Anti-Corruption Commission Royal Malaysian Customs Department