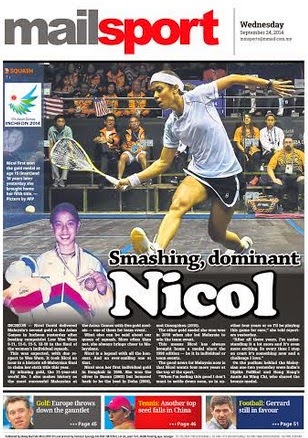 The back page on Sept 24, 2014 celebrating Nicol's success

PETALING JAYA — Another day went by at the Asian Games in Incheon with the girls saving Malaysia the blushes.

She finished behind Mongolia’s Narantuya Chuluunbadrakh, who gunned down 624.1 points.
She also helped Malaysia secure the team bronze medal. Nur Suryani, together with Nur Ayuni Farhana Abdul Halim and Muslifah Zulkifli, scored a total of 1,853.6 points — behind South Korea (1,855.5 points) and China (1,854.1).

“I was disappointed in failing to reach the final in the 10m air event on Monday. But I put my emotions aside to concentrate on the remaining events,” the Royal Malaysian Navy officer told reporters.

This is the first time a Malaysian had won a silver medal in shooting. Four years ago, she was the first woman to win a medal after picking up the ‘bronze’ in the 10m air rifle event in Guangzhou, China.

Nur Suryani joins a proud list of female stars who brought smiles since the start of the Games. To date, all the gold and silver medals came from the girls.

Wushu exponent Tai Cheau Xuen won the nation’s first gold medal in the nanquan and nandao all-round on Saturday. Fatehah Mustapha was the first Malaysian female track cyclist to win a medal after she finished second in the keirin on Sunday.

Their male counterparts, however, have yet to shine as wall-basher Ong Beng Hee and the men’s badminton team picked up bronze medals.

With 10 more days to go for the Games, more female athletes are expected to bring home honours including the likes of woman diver Pandelela Rinong, our bowlers and squash darlings in the team event.