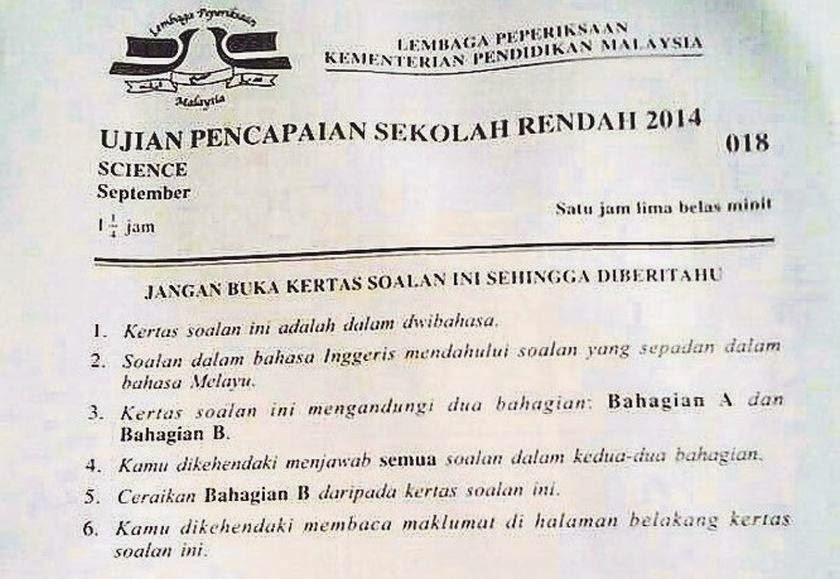 Police said at least one report was lodged in Putrajaya and were verifying if more reports were lodged in other states following the fiasco involving Year 6 pupils nationwide.

“Please give us time to verify the details and investigate this thoroughly.”

While preliminary investigations by the Education Syndicate revealed the 018, 028 and 038 papers were circulated over social media, it is learnt questions and answers for other papers were also circulated through instant messaging WhatsApp. There were also claims the primary school students had also obtained answers from their teachers in school and tuition centres.

Malay Mail received a copy of handwritten answers for the Bahasa Melayu comprehensive paper which was apparently handed out to students on Monday night, barely 24 hours before it was presented.

It also obtained copies of the Science paper which was initially scheduled to be held today but postponed by the Education Ministry following the leak. A set of answers for the English paper, scheduled for today, had also gone viral. There are also claims that the Mathematics paper was compromised as many now feared students would be forced to re-sit the entire examination.

Deputy Prime Minister Tan Sri Muhyiddin Yassin apologised to parents and students involved in the issue, describing the postponement of the Science paper as “unfortunate”.

Muhyiddin, who is also the education minister, confirmed a police report was lodged by the Examination Syndicate.

Education Minister II Datuk Seri Idris Jusoh had said on Twitter: “I am deeply sorry for the leakage of the UPSR Science paper.”

He had in a subsequent tweet said the ministry took the act seriously and “strongly condemned this irresponsible act”.

The Malaysian Communications and Multimedia Commission (MCMC) said it was able to trace the users who had leaked and shared the confidential information.

“Through our technical team, we are able to identify who had leaked the information on social media,” said MCMC chairman Datuk Mohamed Sharil Mohamed Tarmizi.

“We are willing to help the Education Ministry if there is a request to do so.”
Efforts to get the Examination Syndicate proved futile.

The syndicate had said in a statement that the Science paper scheduled for today had been postponed to September 30.

It had lodged a report with the authorities to initiate investigations and take appropriate action in accordance with the law, the statement said.

Some 472,853 pupils are sitting for the examination at 8,299 centres nationwide.

KUALA LUMPUR — A person found guilty disseminating confidential information could face a jail term of up to seven years, according to the Official Secrets Act  (OSA) 1972.
Section 8(1) of the Act, states any person having in his possession or control of any official secret or any secret official code word, countersign or password shall be guilty of an offence punishable with imprisonment for a term not less than one year but not exceeding seven years.
The same jail time was also seen for those who had knowledge that their action contravened the Act, as stipulated in Section 8(2).
Police confirmed yesterday they were investigating the leak in the UPSR Science paper under the OSA.
There have been several cases in the past of alleged leaks in the national examinations. In 2004, a teacher in Kuching claimed the PMR Bahasa Melayu (paper 2) was leaked as the forecast questions handed to students prior the examination was identical to what was presented.
In September 2007, the Examination Syndicate received numerous complaints on the first day of the UPSR over alleged leaks.
Last November, the Muslim Consumer Association Malaysia had claimed it received reports that the questions for the SPM Mathematics and Additional Mathematics papers were leaked. A student said he received the questions during an SPM seminar in Setiawangsa.

PETALING JAYA — Cases of examination papers being leaked was nothing new and have been going on for years.

Parent Action Group for Education (PAGE) chairman Datin Noor Azimah Abdul Rahim said such cases had always been swept under the carpet as the standards set by the Malaysian Examinations Syndicate makes it almost impossible for a “leak to be considered a leak”.

“Although it has been going on for years, the (exam) syndicate has been hesitant to admit to it as there are certain criteria which have to be met,” she said.

“I have heard of the authorities only declaring a leak if the front page of the leaked paper were the same as the actual examination set.”

She said this meant it would not be considered a leak if the font size of the question did not match that of the actual examination papers.

“Many get away with it and we have heard of such things going on for years,” she said.

Azimah said it was high time the ministry treat the matter seriously and a special panel must be set up to investigate and find ways to put an end to it.

“Those behind this should be seriously remanded to deter such things from happening.”

Naming tuition centres as parties who could be guilty of such practices, Azimah said as long as there is a demand for leaked examination questions, there would always be a supply.

“Tuition centres want to gain an edge and attract students. Even teachers themselves could be guilty of the offence.”

Azimah said while she felt bad that the pupils have to re-sit the examination at a later date, the case was a classic example of integrity and moral standards being compromised.

“We are giving kids the wrong impression. They are being taught at a young age that they are able to obtain exam questions. If this is not deterred, it will be part of their culture when they grow up,” she said.

“Teachers part of a panel drafting the examination questions could, for their own interest, leak these questions to their students because they want them to do well. It can also be a situation where teachers are seeking monetary gains,” he said.

Mak said the examinations syndicate and the Education Ministry must conduct a thorough re-evaluation of how questions are stored and who should have access to them.

“The ministry must find out who has access to these papers and how did they manage to leak them to the public as the ministry’s reputation is at stake,” he said.

“We hear of such cases happening often. Even students themselves claim examination questions are the same of that which have been provided by their tuition centres, yet not much is being done to address it.”
2014 education ministry official secrets act Parents police school Science students UPSR