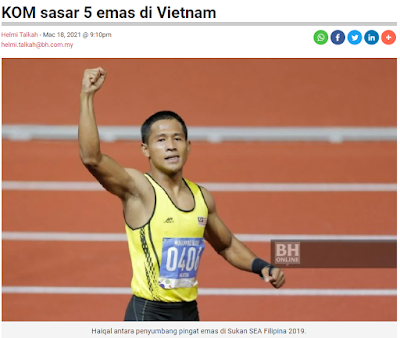 Let's take a look at the five gold medals won by the athletics team at the 2019 SEA Games held in several cities the Philippines.

Muhammad Haiqal Hanafi won the 100m event after clocking 10.35s. He surprised everyone including himself. It was a good surprise as he earned a SEA Games gold medal and inked his name in the history books.

However, the fact remains that his time is no where near the national record of 10.18s set by Khairul Hafiz Jantan.

Andre Anura Anuar won the silver medal in the men's long jump event in the regional Games. He broke the national record after recording a 8.02m jump. The previous record of 7.88m was set by Josbert Tinus at the Thailand Open in 2007.

Admittedly 100m and long jump are two different events but is Andre's record-breaking silver worth less than Haiqal's gold medal?

Perhaps it is easier to define success based on gold medals instead of consistency or breaking records.

Here's something to ponder.