Why hasn't a single Malaysian journalist been vaccinated? What about those covering major events? 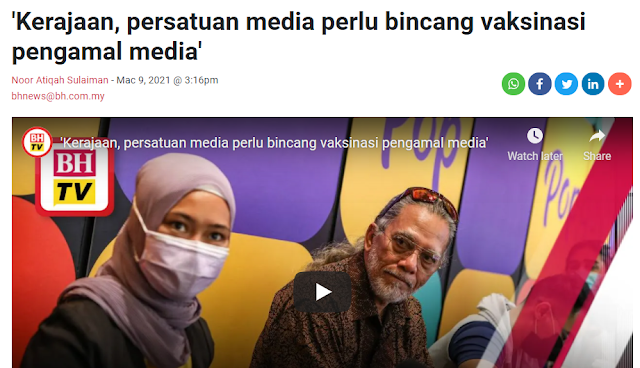 On March 9, Datuk Ahirudin Attan - who is the National Press Club of Malaysia president and Executive Advisor and the Executive Director at Petra News - wrote:

We at the NPC don't make it a habit to ask the Government for handouts but, I told the press conference, it would be nice if YB Khairy Jamaluddin, our de facto vaccine minister, would recognise the role of journalists as frontliners in the war against Covid-19 and make us part of the priority group for vaccination.

His views were picked up by numerous news organisations, including Berita Harian and Getaran.

On April 22, Getaran's Mastura Malak asked the government where is the Covid-19 vaccination for members of the press.

She had quoted Ahirudin as saying:

I'm fully mindful that many others should be ahead in the race to get vaccinated - like the elderly and those who suffer from illnesses. There are those above the age of 60 who have registered for the second phase of the National Covid-19 Immunisation Programme but have not received their vaccination.

However, there's a concern brewing among those in the sports writers community - will they be fully vaccinated in time for major sporting events scheduled this year.  Phase three of the national immunisation programme will begin from May onwards.

There's the World Cup/Asian Cup qualifiers where our national footballers were recently vaccinated ahead of their trip to UAE next month. There's also the Olympics in July followed by the SEA Games in November.

For the record, the organisers of Tokyo Olympics and the Asian Football Confederation (AFC) have not made it mandatory for athletes or even members to the press to be vaccinated in order for them to be part of the competitions.

As such, sports journalists can cover these events even if they are not vaccinated. But there are risks that the individuals and their respective companies must take into consideration - especially with the events being held on foreign soil.

The Olympic Council of Malaysia has a list of "print media" covering the Summer Games.

It is understood those under the list will get vaccinated before their trip to Tokyo while it remains unclear when those outside the list - including broadcasters - will get their shots.

The Malaysian teams, including football, have created bubbles and those who are not vaccinated cannot be part of the bubble. What that means is, if a sports journalist is not vaccinated, he or she will not be able to go near any athlete or official.

And the television crew need visuals. They can't just be relying on Zoom calls or highlights of the matches alone.

It is understood efforts by various parties are being made to address this matter. Let's await for the outcome.