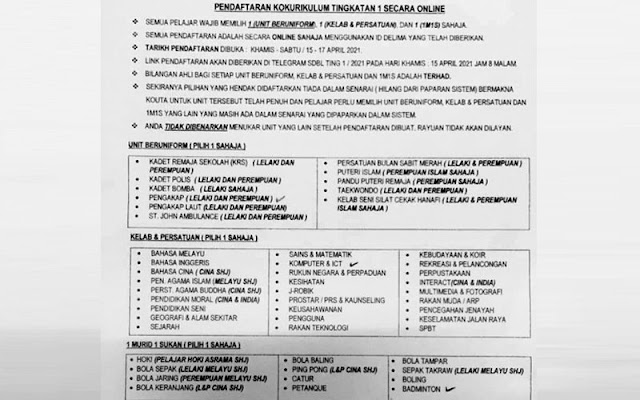 When contacted, the school’s principal Abdul Razak Hamid confirmed the note and claimed the “conditions” were necessary because of the lack of sporting facilities for the students.

“We are a hockey school, so the existing field has to be used for the sport, so there is no other field that can be used for other sports.

“So, we have to set conditions like that to attract Malay students who are not interested in sports to join the various clubs.”

That has got to be the most ridiculous (and scary) excuse I've heard throughout my 21 years as a journalist.

1. ... the “conditions” were necessary because of the lack of sporting facilities for the students.

There are many schools in Kuala Lumpur that lack sporting facilities. Take SMK Maxwell for example. The school does not have a field. Yet, you don't see the school imposing such conditions.

2. “So, we have to set conditions like that to attract Malay students who are not interested in sports to join the various clubs.”

Huh? Then why only Chinese and Indians can join Interact club and not Malays, as per the circular?

Is there something wrong with Interact club? I was the secretary of my school's Interact club. I had friends of all colours and creed in the club. No issues then.

For the record, I played sepak takraw in primary school and basketball in secondary school.

But according to this Johor school, I can't play sepak takraw.

Even two ministers, Youth and Sports Minister Datuk Seri Reezal Merican Naina Merican and Communications and Multimedia Minister Datuk Saifuddin Abdullah have issued statements against the move by the school.

And the Education Ministry has not said a word about this.

This situation is very worrying.