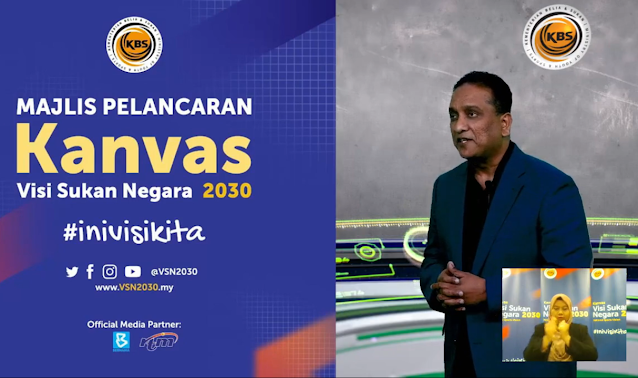 “The national sports vision will include high-performance sports, grassroots development, focus on sports that have potential for glory in major tournaments, and the sports industry. The vision will be inclusive.”

Since then, there have been engagements, sessions and meetings with stakeholders including yours truly.

In Feb, I asked if the National Sports Vision will end up as political gimmick? And on March 27, I hinted on this blog that VSN 2030 will be delayed instead of being launched this month.

At 3pm today, the Kanvas Visi Sukan Negara 2030 was launched. Not the vision itself but a "canvassing" exercise to touch up an existing 'canvas'. Note the difference.

I thank those who made it a point to organise a closed door session among members of the Press at Wisma KBS this morning. At least there is some insight into the plans as the 3pm virtual launch was just a series of announcements with no Q&A session.

As I wrote in today's article in Twentytwo13:

The elements are not exactly new as much of it has been spoken about by previous administrations.

There’s also the question of whether the vision will be followed through once there is a shift in power in Putrajaya or in Wisma KBS.

But the ministry is eager to get the ball rolling. The decision-makers admit sports belongs to all, thus this canvassing initiative to touch up the VSN canvas.

As Reezal Merican said during the launch: “The era of government knows best is over.”

If you are eager to contribute, do so by visiting VSN2030's website. Why should you contribute?

I leave you with this tweet by Olympian and former hockey international Maninderjit Singh.

Sometimes it’s the smallest decisions that can change forever....

Have a good day folks!