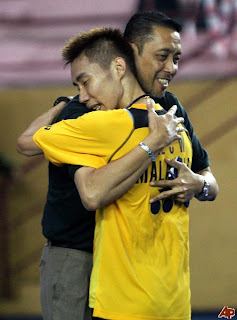 Lee Chong Wei to also leave the BA of Malaysia?

Based on my conversation with the Penangite minutes earlier, several fellow journalists have already asked him about his take on the fact that his long time coach Misbun Sidek has tendered his resignation, as per Rajes Paul of The Star's report here.

And Chong Wei said it loud and clear, "I will follow him."

Interestingly, this was somehow predicted by SS Dhaliwal in his posting Exodus? right after the World Championships in Paris last year (September).

p/s: Several other players and officials have also revealed some interesting stuff over the fiasco. Hmm...