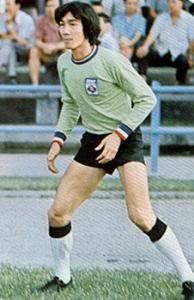 1970s - We had the likes of Chow Chee Keong (pic) and the son of coffee-shop owner Wong Choon Wah playing in Hong Kong. Chee Keong is still remembered until today as the 'Asian Stainless Steel Gate' or 'Crazy Sword'.

1999 - 2001 - Akmal Rizal Rakhli, the lad from Jitra Kedah who was once the poster boy of Malaysian football, enjoyed stints with French teams RC Strasbourg and FCSR Haguenau.

2010 - Puchong-lad Stanley Bernard Stephen Samuel, who was once mistaken as pemain import KL (I don't know how that happened but it did, lol), played for India's Sporting Clube de Goa.

There's nothing new when it comes to Malaysian players playing abroad. So what's the big fuss?