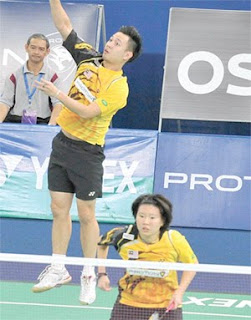 Finally the limelight is on the Malaysia Open. Judging by the reports here, here and here, it is safe to say that the Misbun Sidek saga has taken a back seat - for the moment.

Mailsports, meanwhile, will publish the morning results throughout the tournament, as seen in today's article.

That aside, former Mailsports journalist Rizal Hashim is receiving the wrath of Kelantan fans. Read his posting here.

I was joined by Noor Ermafaiz Izuan Abdul Hadi, theredwarriors.com president on TV3's Scoreboard and before the show we exchanged our views about the infamous trio - in a diplomatic manner. In fact, we traded name cards after the show and promised to keep in touch.

Are the fans simply over-reacting? Or are their actions justified? You be the judge.


Pic of Koo Kien Keat and Chin Eei Hui in their qualifying match this morning, snapped by Razak Ghazali of The Malay Mail.