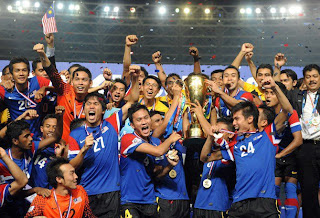 Jakarta Casual's Anthony Sutton speaks of a rather juicy scandal that is making its rounds in Indonesia.

"A story doing the rounds at the moment, well over the last couple of days, revolves around allegations that some Indonesian players conspired to 'throw' the AFF Cup Final 1st leg in KL.

I first heard allegations a couple of weeks ago and was given the identity of the players involved but as is policy I left it. Rumours is rumours and breaking a story like this is best left to people with better lawyers than I!"

Several Indonesian dailies have also highlighted the matter as seen here and here.

A case of sore losers? Or is there any truth behind such claims?

I would certainly like to get my hands on the supposed email.

UPDATE (8.33pm): A little bird in Jakarta claims that the local Polis have confirmed that the email is fake. I would like to see the newspapers confirming this nevertheless.

Also note that the final was closely monitored (live streaming) by betting sites as seen here, here and here.

UPDATE (9.17pm): Got the email! But also got confirmation that Indonesian police not investigating the email which was signed off by an 'Eli Cohen, Pegawai Pajak'.

The second paragraph of the email states:

HD says: Anthony perhaps I could finally do my law degree some justice by 'advising' you if the need arises. Don't worry, I won't charge by the hour. Lol!!