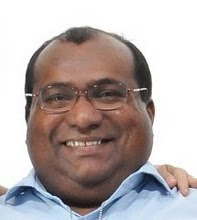 Former newsman Joe Marcose (pic) is the new Media officer for the FA of Malaysia.

Joe, who climbed the ladder from a cadet reporter in the 80s before quitting as sports editor in 2000, replaces Raja Azura Raja Zamani. I was told Raja Azura is now with MSL Sdn Bhd.

By the way, Joe also blogs at Fair Play News.

Personally, I never had any problems with the good Media department of FAM with the exception of a former media officer who was later given the boot. Unsurprisingly, many shared my sentiments.

We also had former newsmen in the form of Rizal Hashim and Satwant Singh Dhaliwal being part of the Media department. They were efficient.

Sadly they didn't last long for reasons best known to them. My take, too much of politics kot.

I remember placing a bet with Astro Awani's Fadzrie Hazis that Rizal wouldn't last more than 3 months. The loser was to buy banana leaf rice for lunch.

Well all the best Joe. Looking forward to seeing you at Wisma FAM.