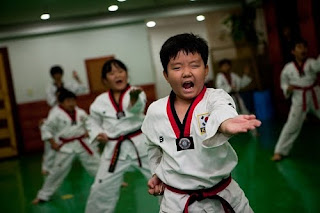 It's just great to see youngsters engaging in sports.

While many are fixated with their computers, electronic games and television, there are others who do find the time to get involved in grassroots sports.

One such programme is the Nestle Koko Krunch Junior Taekwondo Championship.

Olympic Council of Malaysia president Tunku Imran Tuanku Jaafar will officiate the launch of the 6th edition at the National Stadium in Bukit Jalil on Tuesday (Jan 22, 2011 - 10.45am onwards). Members of the Press just received the invitation from former international M.Vasugi.

While the competitors gear up for the tournament, let's watch the 'best taekwondo fight ever!' (sic)