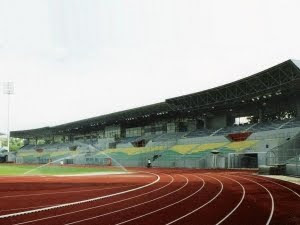 The Malay Mail's crime reporter Aizat Sharif, who has a twisted love affair with KL, highlighted an interesting fact minutes ago.

The bad condition of the playing pitch was the reason KL had to play their 'home' match against Kelantan in Kota Baru yesterday. Malaysia were supposed to play Hong Kong in an international friendly match but the venue was changed to the Shah Alam Stadium instead.

Here's a video of KL playing Perak in a Super League match at the same stadium on Jan 29, 2011.

Unfortunately, due to a logo buy and supposed joint venture, my hands are tied.

For the record, the inaugural tournament is jointly organised by KLFA and is endorsed by the FA of Malaysia. (FAM)

So, is the on-going world invitational meet (scheduled Feb 15-19) is being held on sub-standard grounds? Or is our league too good for such a turf?

You be the judge.

HD says: The official time keeper is Swatch. I am still keeping my Swatch watch which my parents bought after getting straight As in my UPSR. Lol