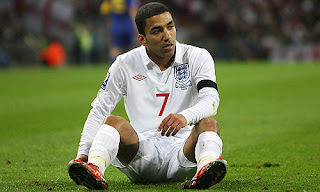 I've yet to visit that city.

But I do have several relatives staying there. Heck, even one of them is a personal friend of Tottenham Hotspur and England star player Aaron Lennon (pic). I was promised a 'makan' session with Lennon if I ever made my way to London.

London is home to many good British bands. The Clash, Sex Pistols and Led Zeppelin.

It's home to the mighty Landrover - which sadly is bloody overpriced here.

You'd see lots of Asians in London these days despite the rain and chilly weather.

One might even bump into several high ranking sports officials from the Sports Ministry this week - or so I was told.

Apparently, it's part of the sports industry ahead of the London 2012 Olympics - again or so I was told.

If ture, the million Ringgit question on everyone's minds. How much did tax payers have to pay?

Oh well, my only association with London at the moment is listening to The Clash joining forces with Dave Grohl and Bruce Springsteen singing London Calling.

HD says: Perhaps those concerned could join Tony Blair 'singing' The Clash's "Should I stay or should I go".