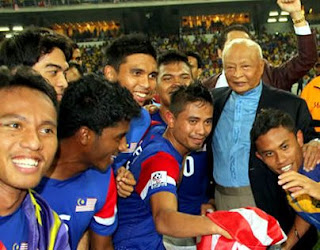 Our national footballers, who hogged the limelight after wining the Asean Cup, received more money at Wisma FAM earlier.

FA of Malaysia president Sultan Ahmad Shah (pic, flanked by the national players) handed out RM50,000 to all 22 players and national coach K.Rajagobal.

Sultan Ahmad said "the national team cannot be satisfied with a win at the Asean level but instead strive for bigger international success by qualifying for the 2012 London Olympics and 2014 World Cup".

HD says: Wished I had picked up a sport seriously. Sigh!