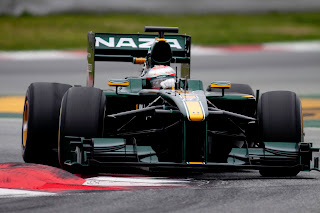 Below is an email by Team Lotus in response to the statement made by Proton (17th February) concerning the ongoing disagreement between 1Malaysia Racing Team (1MRT) and Proton / Group Lotus.

The statement (by Proton) contained a number of factual errors that are at best misleading and at worst straight lies. The case concerns the unlawful termination of 1MRT’s licence to use the Lotus Racing name and Team Lotus Ventures’ rightful ownership and usage of the Team Lotus name in Formula One.

Proton’s statement contains a number of points that are designed to paint a very negative picture of the shareholders and founders of 1MRT and to cloud the truth ahead of the court case between 1MRT and Group Lotus, beginning in London on 21st March:

- Proton has now stated for the first time that 1MRT could have remedied the breaches in the licence agreement and continued to use the Lotus Racing name in 2011. None of this is true and is in direct contradiction to the reasons given at the time for termination of the Licence which said that the breaches alleged were not capable of remedy.

Additionally, in a number of recent media articles it has become clear that the Renault F1 team were working on black and gold livery designs for their 2011 car in August 2010, well before the licence allowing 1MRT to use the Lotus Racing name was terminated. The only possible reason this livery was being planned was to promote Renault F1’s sponsorship with Lotus Cars, using a classic Team Lotus F1 livery to cement their brands’ relationship in the public arena. This begs the obvious question - If Proton were happy to allow 1MRT to continue to operate under the Licence and use the Lotus name, why were their employees at Group Lotus working with Renault F1 arranging a sponsorship deal which was in direct contravention of the exclusive licence given to 1MRT and using a livery so obviously owned by Team Lotus Ventures and not Group Lotus. Unfortunately Proton’s assertion that 1MRT could have continued to use the Lotus Racing name in 2011 is made to avoid the obvious conclusion that Group Lotus was itself in fundamental breach of the 1MRT licence, as is proved by their own partners at Renault F1 telling the truth about when they started working with Group Lotus on their proposed sponsorship deal. Fundamentally Proton made it very clear that they no longer wanted to work with 1MRT and the facts of this will be borne out in the upcoming court case.

- Reference is also made to the sum of money offered to 1MRT for the Team Lotus name, suggesting that 1MRT shareholders were making unreasonable compensation demands of Proton. However, what Proton fails to mention is that the vast majority of the compensation sought by 1MRT was to cover the loss of FOM revenue awarded to the team for their efforts on track in 2010. 1MRT asked Proton to indemnify them against the potential loss of prize money from FOM which would have resulted from 1MRT having to change its chassis name. The compensation sums being discussed for 1MRT leaving aside the FOM revenue were not overly generous, which is specifically why Proton has not included that in their statement yesterday. With the FOM revenue included the sums are reasonable - without referring to it Proton are able to paint 1MRT as greedy which is why they are deliberately excluding that key point.

“It is obviously disappointing to see Proton issue yet more downright lies ahead of the court case in London on 21st March. It would appear that they are becoming desperate because they are now contradicting themselves in the public arena, for example now saying they would have allowed us to continue using the Lotus Racing name and that the alleged breaches of the trade mark licence were capable of remedy, and are trying whatever they can to force us to bend to their will. We have invested a considerable amount of time and our own personal money in Team Lotus and we are seeing the fruits of that investment begin to blossom on and off track.”

Kamarudin Meranun added: “When we first started our F1 program it was intended to be a Malaysian national project, one that truly reflected the government’s call for 1Malaysia. We wanted to use a combination of the skills and experience of the government, GLC and private enterprise to create something truly spectacular. This has not turned out to be the case as we are now carrying the hopes of the nation on our own. Proton’s involvement with us was intended to help them turnaround the company and give the brand a global platform without any major financial risk on their part. We now see that they have taken on a much greater risk by guaranteeing the loan Group Lotus needs to fund its plans and they have therefore left themselves open to far greater financial exposure.

“We have put out own money into Team Lotus and have taken on all the risk ourselves. Our counterparts at Proton are using Malaysian tax payers’ money to take a massive corporate gamble on the future of Group Lotus. Some basic financial facts bear this out – the interest servicing the proposed loan amount of more than RM 2billion, excluding capital repayment, is equivalent to the profit Proton made last year, just over RM 200 million. This means Proton is indirectly funding the entire plan themselves which is itself a hugely risky strategy. This is not just my personal view, it is also a view that has been shared in public by high profile members of the global financial markets who see the folly of these plans and are questioning the likelihood of its success.

“With their unlawful termination of our contract and their ongoing harassment of us in the public arena Proton is asking us to incur substantial losses and step away from our investment meekly and without a fight. I hope CEO Syed would do the same and be accountable for his actions in front of the nation if his overly ambitious plan for Group Lotus fails.

“My conscience on this matter is clear. In this web of fitnah I leave my fate in Allah’s hands because the truth will prevail. Inshallah we will overcome these challenges.”