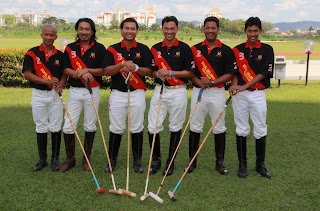 Those were the words of national polo team manager Ahmad Jamili Rashid.

“We’ve been training hard with stints in Argentina. We have left no stone unturned. This team is capable of going far not only in the Qualifier but we are also looking at things beyond this,” said Jamili.

The countries competing in Zone D, apart from Malaysia, are Australia, New Zealand, India, Pakistan, South Africa, Nigeria and Singapore. The top three book will partake in the FIP World Cup in October.

The qualifiers will be played at three different venues – namely the Royal Pahang Polo Club in Pekan, the Putrajaya Equestrian Park and the Royal Selangor Polo Club.

HD says: It's been awhile since I last rode a horse...a real four-legged horse.