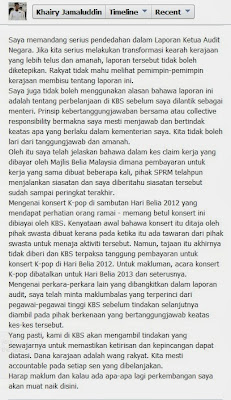 Also in contention was the RM2.94 million spent by the ministry in the promotion and publicity of National Youth Day 2012.

The report notes that RM1,111,927 was spent just on promotion and publicity while another RM1.6 million was spent on paying the K-Pop artistes UKiss, and Teen-Top and Dal Shabet.

The ministry also spent RM42,500 for 17 units of "robot-themed boards", RM42,466 for the accommodation of journalists and a hi-tea reception at the Marriot Hotel in Putrajaya, and another RM107,500 for bloggers to promote the event.

It has been noted as "high expenditure" by the auditor-general.

Youth and Sports Minister Khairy Jamaluddin assured action will be taken against those who waste tax payer's money.

HD says: I still remember the previous audits on an agency within the ministry...