In what is best described as a major oversight, the nation’s security industry is left to the devices of “illegals”.

Fresh from the shooting incident where an Indonesian security guard shot AmBank officer Norazita Abu Talib at the branch in Jalan USJ Sentral 2, Subang Jaya, before running away with RM450,000 from the vault, findings by The Malay Mail revealed:

● Security guards in residential areas, condominiums, high-rise buildings, financial institutions and factories in and around the country are mostly Bangladeshi, Pakistani, Indians, Burmese and Indonesians. For the record, only Malaysians, Nepali ex-servicemen and Gurkhas are allowed to work as security guards in the country.

● Rogue security companies will "franchise" their services to a third party.

● An acute shortage of armed guards forces companies to arm their men despite not obtaining the required licences.

● Those securing security services do not conduct background checks on the company.

● Security companies do not vet their guards, or obtain approval from the police as required under Section 9 of the Private Agencies Act 1971.

● Guards are allowed to apply for gun licences after having served a company for only six months.
The situation is expected to worsen as the minimum wage of RM900, set by National Wages Consultative Council, will come into force come Jan 1, 2014. The main industry players believe this will see more rogue companies mushrooming as they will be able to provide cheaper services by hiring more “illegals”.

Meanwhile, several teachers were riled up over a professional English course introduced by the Education Ministry, claiming they were forced to attend despite not having taught the subject for years.

A briefing for KL-based teachers for the Professional Up-skilling of English Language Teachers (PROELT) 2014 session was conducted by the KL Education Department on Oct 3. Many who attended left dissatisfied as they were told it was a mandatory course conducted by British Council due to the “large sum of money spent” for the programme.

According to the 2014 list, some 83 teachers from the Bangsar/Pudu Zone alone will be attending the course. The other two zones in KL are Sentul and Keramat.

This comes about after DAP assistant national publicity secretary Zairil Khir Johari, had in a statement recently revealed the Education Ministry spent a staggering RM268.5 million from 2011 to 2013 on three consultant firms — British Council, Brighton Education Group and SMR HR Group — to train some 7,500 teachers from 1,800 schools nationwide. 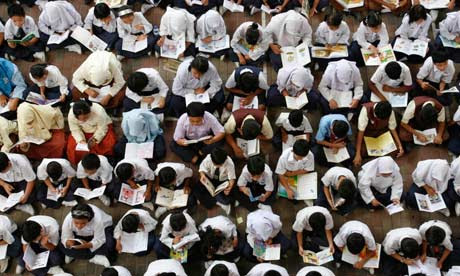 The Bukit Bendera MP insisted that the amount of money spent for the programme was “absurd”, particularly as feedback from those involved indicated that they had not learned much from the training.

It, however, remains unclear to the cost the ministry will incur for next year’s course.

I spoke to several teachers about the matter. They wished to remain anonymous for fear of little Napoleans penalising them for speaking to the Press.

“I taught English years ago in a school in east coast. I obtained a degree in another subject and I am now teaching that subject instead of English,” said a teacher.

“I was shocked to see my name on the list. I won’t mind attending but my school already has enough English teachers. Wouldn’t it be better if someone who actually teaches the subject attends the course instead?

And here's a touching story about love - a man from Cheras who just couldn't accept the fact that his wife had died of a heart attack, treated her as though she was still alive, talked to her and even changed her clothes for 35 days before reporting her death to the police. Read the full story here.