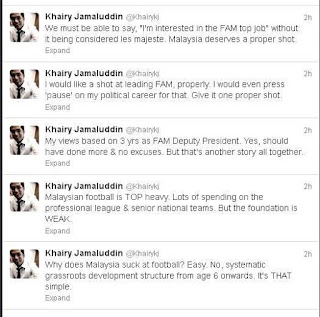 "I would like a shot at leading FAM, properly. I would even press 'pause' on my political career for that. Give it one proper shot."

Khairy has seen his fair share of ups and downs in the domestic football scene. The Umno Youth chief was once involved with the now defunct MyTeam before securing a position within the national body.

The Rembau MP was rather vocal during his stay in FAM and that did not go down too well with some of the elders.

I've interviewed Khairy or better known as KJ, on many occasions - from the launch of UPB-MyTeam at Bukit Kiara, meeting him while he was deputy president of FAM and even sought a clarification after he was quoted as saying that the "Malaysian League was crap".

But he was willing to take the rap for his actions - a trait hardly seen by the current set of officials - as seen here and here.

And this is an article of mine published in The Malay Mail in 2009; 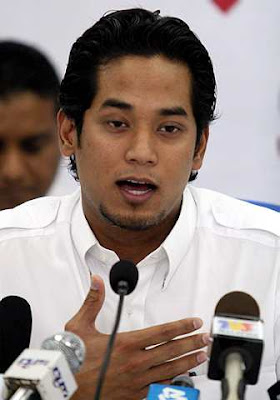 THESE days you can’t talk about local football without talking about Khairy Jamaluddin (pic).

The FA of Malaysia deputy-president and national team manager is a hot topic by himself.
So the charismatic MP of Rembau, widely known as just ‘KJ’, is always a compelling interview prospect for the Press.

Mailsport’s HARESH DEOL found that out last Saturday, during the interval of the KL Plus – Kuala Muda Premier League match at the Cheras Stadium.

In a terse yet forcible interview, Khairy talks about the M-League, the bookies and critics.

Mailsport (MS): The MSL was formed in 2004 with the objective of raising the game’s standard. How effective has it been so far?

Khairy Jamaluddin (KJ): The league has not shown much improvement.

We need to revise it. Perhaps there are simply too many matches with the leagues, the Malaysia Cup and FA Cup. It has been a little disappointing.

MS: The Super League is rather disorganised as we still don’t know how many teams will be relegated even when the season has ended.

KJ: We’ll know when the exco meeting is held on May 17. I admit it’s rather disorganised and we’ve got to look into it.

The number of teams in the Super League also needs to be addressed. A lot of other things need to be reviewed too.

MS:Would it be better to allow MSL instead of FAM to organise the league? KJ: Even if that happens, will it guarantee a raise in standard? We simply need to break everything down and start afresh.

If you asked me, perhaps we could skip a generation and concentrate on the youths. What’s the use of spending so much money at the top level when the base is not strengthened? When you get lousy players at the bottom, whatmore to expect when they reach top-flight football? I’m happy we’re working well with the Ministry of Education (through the agegroup competitions) but it’s still not enough.

We need more matches to cater for a larger pool of youngsters. It has not been encouraging so far and more needs to be done for our younger generation of players.

MS: So wouldn’t the RM17 million pumped into the Champions Youth Cup be better spent on schools? KJ: If you ask me, not as FAM vice president but as an individual, I would agree. Such money should go towards youth development.

No question about that.

(Khairy told the media earlier that the FAM are considering not sanetioning the CYC and disagree with AFC’s role in the tournament as FAM are the sport’s governing body in the country.

Also, FAM doubt the tournament is value for money.) MS: We were rocked by another match-fixing scandal. Do you think it’s time for betting to be legalised in the country? KJ: That’s for the government to decide but I don’t think it will solve the problem. There will still be illegal syndicates offering higher cuts than the legalised ones, so we’ll be back to square one.

MS: You started off with MyTeam. Today, you’re the Vice-President of FAM.

Is the SportsMinistry your next destination? KJ: No la! Nothing of that sort. I’m just looking at football for now.

MS: You seem to have many critics, from coffee shop patrons to the blogsphere.

Any comments? KJ: You’re talking about football or in general? (smiles) Either way, it’s what I do that matters. It’s all about results at the end of the day.

HD says: So you plan to run in the next elections, FAM elections that is, YB?
deputy president FA of Malaysia football Khairy Jamaluddin MyTeam Rembau MP Umno Youth