RIP Zul. You will be missed. 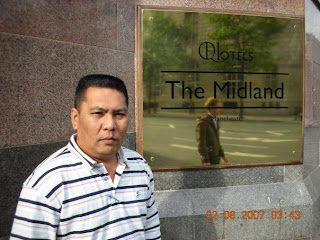 He is a familiar face in the scene and all of us in the industry have many memories of him.

I know him as a family man. He never misses any of the annual National Sports Council media games and his children will always tag along. And they would win prizes too!Thank you Zulhilmi for all your contributions. I will miss your funny Facebook postings.


My sincere condolences to your family.

Rest in peace brother for you will be sorely missed.


KUALA LUMPUR, Oct 1 (Bernama) -- Zulhilmi Supaat, head of the Sports Desk at the Malaysian National News Agency (Bernama), died on Monday at Selayang Hospital. He was 44.
His widow, Noor Aidah Idris, 37, said Zulhilmi was admitted to the hospital last night after he complained of difficulty breathing. He died at 7.45 am.
Zulhimi leaves behind four children, Amir Fitri, nine, Alya Farisah, seven, Aina Farizah, six, and Akmal Fahmi, five.
He joined Bernama in 1992 and had covered various sports events in the country and abroad, including the recent Olympic Games in London, the Asian Games in Guangzhou in 2010, the Commonwealth Games in New Delhi in 2010 and the Thomas Cup badminton tournaments.
Zulhimi was also a committee member of the Sportswriters Association of Malaysia (SAM).