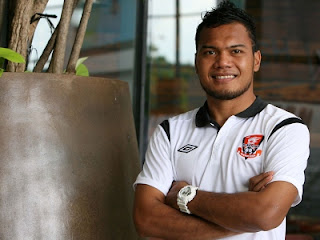 UPDATE 2.19pm: "Both Safee (Sali) and I met Alex Soosay (AFC general secretary) earlier today and he was shocked with this whole episode. He assured us that AFC will send PSSI a letter to explain their actions.

We then met FAM secretary general Azzudin Ahmad to again explain the situation and he agreed with our explanation. Safee is now free to join his team mates for training and he is expected to train this evening." - Safee Sali's manager Zack Rahim.


"We adhered to Fifa's rules and they have made a decision since last year but now the matter in Indonesia has hit the wall. Fifa, being the guardian body, has the authority to disband member associations...no one else does."

Those were the words of FAM secretary general Azzudin Ahmad when met at the sidelines after Armed Forces edged LionsXII 5-4 in penalty kicks to book a berth to the Malaysia Cup final after both teams were tied at 1-1 (aggregate 2-2) at the Selayang Stadium last night.

Azzudin was responding to my question regarding national poacher Safee Sali's status with the national squad.

Safee plays for PSSI club Arema-Pelita Jaya. There is an on-going spat between PSSI and ISL as both claim they are legit.

Such a decision could force Safee to ditch his lucrative million-Ringgit deal with Arema-Pelita Jaya, as seen here. Or he could opt not to don the national colours as Harimau Malaya plans to defend their AFF Suzuki Cup title in their own den next month.

Safee is clearly upset over this whole episode and is expected to voice his opinion soon.