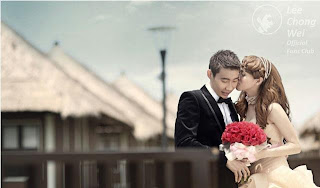 Well 10 lucky fans will be able to join world No 1 Lee Chong Wei and long time girlfriend Wong Mew Choo 'yam seng' during the dinner reception on Nov 9 at the KL Convention Centre.

Among those who are expected to attend the dinner include our beloved King, Prime Minister Najib Razak and his wife who is also the BA of Malaysia patron Rosmah Mansor.

There will be another reception for family members and close friends at the same venue a day later.

According to Bernama's report, Chong Wei Bina Jaya Sdn Bhd's brand marketing director Sachi Choo said what the fans needed to do was to stay tuned to Chong Wei's 'Lee Chong Wei Official Fan Club' status update on his Facebook. The picture above was taken from the same facebook page.

"My mother is very happy and the whole family is excited about the wedding because they (Chong Wei and Mew Choo) will be united after all these years," said Chong Hoon as quoted by Bernama.