When officials rule the game 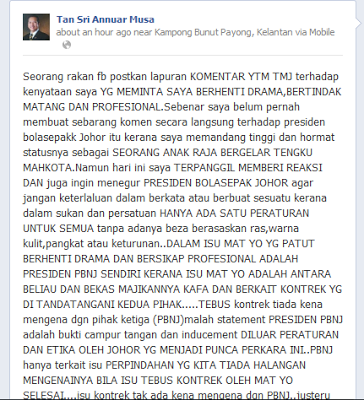 In the early part of last season, we kept reading about the spat between the FA of Malaysia (FAM) and Kelantan FA (Kafa) president Annuar Musa.

This season begins with a war of words between Annuar Musa and Johor FA president Tunku Ismail Ibrahim.

And the star of the current episode is Norshahrul Idlan Talaha.

Better known as Mat Yo, the national striker was lured from Kelantan by Darul Takzim FC. During the national team's campaign in the AFF Cup, Norshahrul was offered a job with the southern club.

Kafa claims it had no qualms releasing Norshahrul provided it was compensated. However, judging by the reports the deal didn't really go smoothly as seen here and here.

Recently, Annuar Musa raised the transfer fee which has yet to be paid to Kafa. The Johor prince, had in a press conference in Johor Baru yesterday retaliated by saying; “Don’t be childish and don’t politicise football.”

That statement certainly didn't go down to well with Annuar Musa who ranted on his Facebook page (pic).