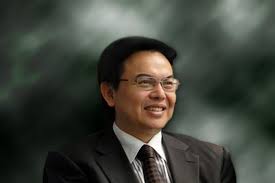 "This is my last term with BAM as president and the executive council (exco) members have urged me to go for it. I have agreed."

Those were the words of Nadzmi Salleh (pic) as reported here.

It is important to have some form of representation within the world body. However, should Nadzmi eye for the job?

With all due respect, Nadzmi has got bigger issues to deal with at home. For starters, the nation is certainly heading toward Indonesia's direction as to the serious lacking of talents. The country continues to pin its hopes on world No 1 Lee Chong Wei - but for how long?

Also, the nagging issue of players from clubs not given the due respect they deserve. While the BA of Malaysia may say otherwise, the presumption still lingers that club players are continued to be sidelined.

Nevertheless, we now have the Sports Minister handing out money to a particular club and to quickly add that other clubs also deserve funding by the ministry. Good recognition but who decides or what is the criteria of funding given out to clubs?

After all, the ministry's money is tax payers' money.

It has been far too long that none of the second string shuttlers can stand at par let alone give Chong Wei a good challenge on the court. To unearth another Chong Wei - as I've said many times before - is no easy task as such 'freaks' (and it is meant in a good way) don't come by everyday.

But how do we bridge the gap? How do we sit and find the right formula to address this issue? How do we get more students to pick up the racquet - in addition to the millions BAM received from their sponsors to which a portion of it has been channelled for the lower levels.

How do we organise more tournaments? How can we get national shuttlers to visit schools as part of a continuous campaign to inspire the young enthusiasts?

And there's also the role played by the High Performance director, or was it directors or a committee? I've lost track.

So sir, you have a lot to address in Kuala Lumpur. Perhaps heading BWF, without ironing such issues will not be a good idea after all.

But I could be wrong.