Where is the pride? 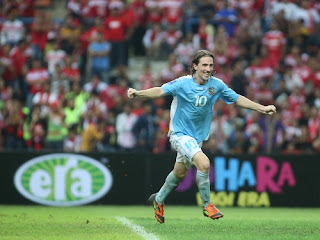 It is named after the ruler of a state.

He is also the longest serving president of the national football association.

Yet, no pride was seen during the Sultan Ahmad Cup Shah match at the Shah Alam Stadium last night.

The prize giving ceremony turned out to be more of a "have to" instead of a "want to" situation. Players were quickly handed their medals, more of a rushed situation as those in the stadium and viewers out there wondered if the organisers wanted to get the whole ceremony over and done with in a jiffy.

The turnout wasn't great but perhaps it is the start of the season and to host a match at the 80,000 capacity stadium would certainly make a small turn look really minute.

And there is nothing charitable about the match as the FA of Malaysia calls it the Sultan Ahmad Shah Cup and not the Charity Shield. It can only be called a charity shield if the proceeds of the match goes to charity.

That aside, congratulations to the Armed Forces (ATM); tough luck Kelantan.

The Gladiators won the first round of the epic battle with The Red Warriors after edging the latter 4-3 in penalty kicks as both teams were tied to a 1-1 draw after full time.

Kelantan's star Indra Putra Mahyuddin started the ball rolling in the 56th minute but was Irwan Fadzli Idrus free kick turned into the equaliser for the army boys during the 90 odd minutes of the match.

This is the official start to the 2013 M-League season. Let the games begin.