UKRC saga: When will it end? 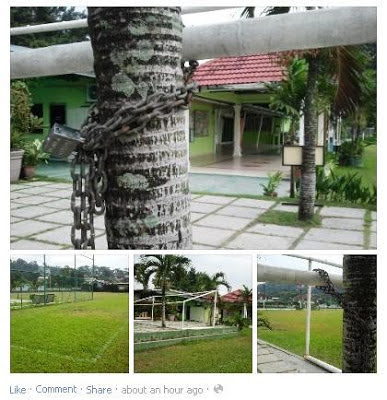 We speak about fields being robbed in the name of development.

What about fields that are being locked down in the name of - erm... pride?

The UKRC field in Ampang has experienced its fair shares of ups and downs. It has always been a great venue for folks in and around to sweat it out.

In fact, The Malay Mail team were invited to play football against the UKRC folks on many occasions.

The Malay Mail had a good relationship with UKRC and had always championed the club's cause - from the days of Datuk Ahiruddin Attan to Yushaimi Yahaya - staying true to its identity as The Paper That Cares.

Some of the reports can be viewed here, while chronology of events as seen here;

● April 14, 1994: The battle to save the Ulu Klang Recreational Club and its football field begins when the field is allocated for a primary school and 10 bungalow lots.

● 1996: The club and residents send a protest note to the Gombak Land Office after former Hulu Klang State Assemblyman Datuk Fuad Hassan confirms the school project.
The club fences up its field and the issue dies down.

● July 1998: Two men tear down the fencing and claim that parts of the field belong to them. That was when the club members realised the school project was still on.
They seek help from then Gombak MP Datin Paduka Zaleha Ismail and Fuad, and even approach the Selangor Education Department.

When the club doesn't get the help it needs, they turn to the public and embark on a signature campaign. A petition is submitted to then Selangor MB Datuk Seri Abu Hassan Omar. An official from the Gombak Education Office confirms that a school will be built on the football field.

● April 2002: Residents discover that the field was earmarked for a squatter relocation project, which then MB Datuk Seri Dr Mohamad Khir Toyo supports.

● Aug 20, 2003: Then Prime Minister Tun Abdullah Ahmad Badawi tells the State government to allow green areas to remain as such. Following this, Dr Mohd Khir allows the field to remain but says it is under MPAJ’s care.

● Sept 27, 2003: The Malay Mail conducts an SMS poll to see if the public approve of MPAJ taking over the UKRC field. Sixty per cent of respondents feel UKRC should retain the right to keep their club and field while 40 per cent feel otherwise.

● Sept 29, 2003: The club hand delivers a letter to MPAJ ordering them to remove a notice board a day after the council erects it. The club says it had to be removed within seven days, failing which they would obtain a court order to do so. The board is removed, but then council president Ramli Mahmud said the original board was removed only because it carried the wrong signage. He says the State government had issued orders for the sign to read differently, adding the new signboard will read "Padang Awam Kuala Ampang".

● 2005: The land is gazetted a green area and the public field remains.

● April 27, 2006: MPAJ announce they will take over the management of private-operated public halls, including that of UKRC.

● April 14, 2008: The Malay Mail reports UKRC will know within the week whether they will finally be free of the looming threat of development — a pledge by Hulu Klang State assemblyman Saari Sungib, who says that the Selangor government is expected to come to a decision soon.

UKRC's spat was always with regards to the ownership of the land. Promises were made by politicians only to remain as promises.

Recently, the club has been plagued with infighting with it being highlighted in various newspapers as seen here, here and here.

Yesterday, the picture above was posted on UKRCforall's Facebook page.

If true, then it goes against the true spirit of the field - to promote sports to the masses.

People are tired of the blame game and politicking. It's time to move forward.

Otherwise, the infighting will lead to the club losing its field.

Note: Please refrain from making damaging comments against any particular individual. Comments should be made on how we can help solve this matter.