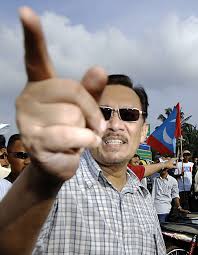 UPDATE April 6, 2013 (12.20am): Mere talk indeed as Anwar will defend Permatang Pauh after all, as reported in The Malay Mail.

“Perhaps, it is just a signal or a strategy employed by Anwar (Ibrahim) to confuse our rivals. They tend to get overly excited whenever Anwar makes an announcement."

Throughout my conversation with Amir yesterday he mentioned "Kalau benar..." three times - referring to Anwar's plan of contesting in Perak.

The PKR de factor leader is expected to make an announcement as to where he will contest during a 'ceramah' in Permatang Pauh tonight.

Amir admitted Anwar's loyal supporters are slighted over the news. Read the sentiments of the folks in Permatang Pauh in The Malay Mail today.