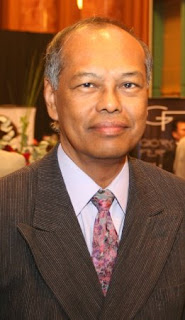 Former FA of Malaysia (FAM) general secretary Ibrahim Saad (pic) is the latest to lambast the national body for hauling up national coach K.Rajagobal for apparently violating Article 88 of the FAM Statute.

Ibrahim, who served FAM from 2005 to 2007, said that Rajagobal is a staff and that action should be taken in a typical employer-employee manner.

Why Article 88 and not the Technical Committee, Ibrahim asks.

It must be noted Article 88 clearly states; "no official, FAM coach, affiliate or player, with the exception of the President and the General Secretary, without the prior approval of the Congress are allowed to contribute articles about FAM's administration or criticise FAM to the Press."

To that Ibrahim said cynically; "What is Article 88? It wasn't there during my time."

All this and more in the backpage of today's The Malay Mail.

HD says: Do read page 8 of The Malay Mail where not only Parlimen Bubar was trending but #BubarFAM was also seen on Twitter.