Who will the new FAM gen-sec be? 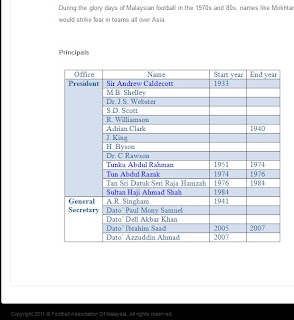 And there will be no shortage of officials who believe they have what it takes to take over the hot seat. Already, several names have been bandied about with Selangor FA general secretary Hamidin Amin among the frontrunners.

The FAM exco are scheduled to meet in Kuala Lumpur today with the potential candidates for the general secretary post on its agenda.

According to FAM’s statutes, the appointment of the general secretary is the prerogative of the president. However, the job was once advertised in the local dailies after former FAM general secretary Dell Akhbar Khan left Wisma FAM.

Kin Keng was a former Selangor goalkeeper and cricketer. Murugasu and Mony were teachers, Dell a former KL top cop while Ibrahim was a former deputy minister in the Prime Minister’s Department who later became the Malaysian ambassador in the Philippines.

With such high-profiled names, it only seems right to have someone of equal standing in society to play a central role in governing Malaysian football.

Dell said the candidate should be one who possesses management skills.
“One needs sports background, not necessarily a sportsman but who knows how sports are being run,” he said.

“The person who occupies the position needs to attend high-level meetings, and represent the country at Asian and world levels.”

Ibrahim said a general secretary should be one who is people-friendly.

“Football is a game loved by everyone and everyone thinks they know the game and would want to comment on it.

“Don’t bother trying to spin or make excuses. It will expose you as someone who cannot answer queries," said Ibrahim.

Should FAM decide to name Hamidin, he would have to quit all his current posts, which include as FAM vice president and the competitions committee chairman.

FAM could lose another vice president – in the form of Subahan Kamal – pending the May 5 general election.

For Azzuddin's successor, there many things the secretariat should look at, such as the website which does not feature the complete list of general secretarys. FAM also do not have a library – physical or online  - on Malaysian football while the folks at Wisma FAM have yet to adopt a paperless working culture.

There are hardly any updates whenever the national teams are on overseas training while many, journalists included, still relay on betting and odds websites for live results of matches involving the national team.

The general secretary is the face of FAM and that same face would be constantly plastered on the back pages of the local dailies.

Above all, he needs to be a professional.