THE nation has every potential of producing F1 champions if more time is spent structuring a proper development programme.

Such was the sentiment of former world champion Mika Hakkinen.

“Of course you have every opportunity of creating a champion. It’s how good a programme is and how you manage it,” said Hakkinen in an exclusive interview thanks to Compass Communications in Subang yesterday.

“Programmes should cater to children from the ages of nine to about 18 or 19 where they will then mature into the various categories of racing before graduating into F1.”

The Flying Finn explained such programmes need to emphasis the importance of education, physical training and skills on and off the track.

“It’s no science but pure logic. You cannot make a champion within two or three years…maybe seven to 10 years but with the right programme in place, you will be able to get good racing drivers.”

When asked if Hakkinen, who won the F1 title back to back in 1998 and 1999, was interested to be part of such a development plan in Malaysia, the Finnish quickly said; “Why not?” before breaking into a laugh.

Hakkinen, who is in town for Johnnie Walker's 'JoinThePact.com Never Drink and Drive’ campaign, is delighted to be back in Malaysia.

“I’ve visited Malaysia before (in 2009). The people here are great but you have a very demanding circuit (Sepang). It is a very physically demanding circuit so drivers will have no time to explore the city when they come here as they are very focused on their race.”

Meanwhile, Hakkinen cautioned the poor economy in Europe could affect the smaller racing categories in the near future. 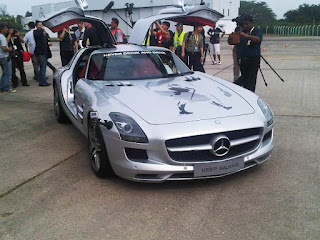 The overly exaggerated costs spent by F1 teams coupled with the sluggish economy worldwide especially in the first half of 2012 is a course of concern for most in the industry.

“It’s a very good question. The economy is not so great now, not only in Europe but everywhere, but honestly I think it may affect the lower categories and not F1 per say. It’s not easy and cheap starting out where you are not a professional, where you are doing it as more of a hobby.

“This is where companies and governments need to think of ways to address this issue. Sometimes you still need to invest to reap the returns.”

"We have obtained the support from governments around the world as we encourage people to practice safe driving and to never drink and drive. It's about driving with responsibility," he added.

FORMER two time F1 champion Mika Hakkinen has the given the green light as his protégé Valtteri Bottas reveals the desire to move from a reserve driver to a full F1 driver next season.

Hakkinen has played a vital part of Bottas’s development as the latter is seen as Finland’s potential future champion. Bottas is eager to book his seat in a Williams car as a permanent feature on the grids.

“Some people get arrogant; some people do not have the right character to race but not Bottas. He is a good for his age, has a great attitude and he is doing well,” praised Hakkinen.

“It depends on the management he is not only talented but great with people and this is important in racing.”

Bottas is the reigning GP3 Series champion. He had openly admitted to GPWeek of wanting to race with

Williams, adding he “really enjoys” working with them and “feels at home”.

HD says: It was fun sitting next to Hakkinen as he took the SLS 63 AMG for a spin. Watch Astro Awani (501) for the exclusive interview.
F1 johnnie walker Mika Hakkinen SLS 63 AMG Valtteri Bottas