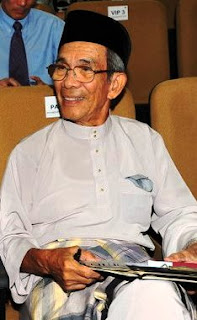 It was an interesting hour indeed.

Some say Joota means million while in Hindi, it means shoe.

Through that I managed to spend some time with Noh at the Lake Club. At 81, he is still rather an active man - on the internet or spending time chilling with friends at the club house.

We discussed about many things. As Noh, who served NSC throughout the 80s, is now the president of the national baseball association, it is safe to say he has seen life on both sides of the fence.

"Policies have remained the same and there has been a continuation but it boils down to management at the end of the day," said Noh who was smartly dressed in a light blue shirt and khakis with a tie neatly tucked between his collar.

"Funding was a problem in the past but all that changes for the Jaya 98 programme. The image and economy of sports in the country has increase and it will be about time sports will deliver the results many hunger."

Noh was rather polite about his take on the current situation at NSC. Unlike Mazlan Ahmad, Noh was certainly not keen to rock the boat as he - just like many other NSAs - still rely heavily for money from the Sports Ministry.

But he did say this; "There seems to be too much emphasis on the elite sports but sports is supposed to be for all and that has always been NSC's policy."

So did he think Malaysia did well at the recently concluded Olympics?

"Yes, I believe we did well as there has been an increase (in the quality of sportsmen) and I expect more winners at the 2016 Games in Rio," added Noh.

"But we must be professional. We lack in that. Let me give you an example...when I was the DG, we sent coaches and guidelines to the Koreans to build up their hockey team. Today, the Koreans are far more superior than us in the sport. We remained stagnant while the rest of the world pushed the bar."

"So this has nothing to do with policies as we have good policies and guidelines in place. It goes back to management and professionalism."

Noh spoke about how difficult it is to promote baseball in the country but said more people are beginning to enjoy the sport.

"I use the social media to interact and promote the sport," he said.

Noh's words are nothing new. It must be pointed out the national sports scene was not at its best at multi-sports events during that period.

But as Noh said, we always had policies and Acts in placed.

The question now remains - has it been severely overlooked?

Catch the interview on Sukan Awani (501).

HD says: It was great catching up with Noh and I'm still amazed how Noh has embraced the internet better than most officials half of his age.
joota National Sports Council noh abdullah