When interviewed by Astro Awani's sports desk, Chong Wei said he will try for the 2016 Olympics and revealed it could be in the (mixed) doubles event. Was it a joke or something he is seriously toying with? Only time will tell.

Top national shuttler and London Olympics silver medalist Lee Chong Wei is expected to return to a hero's welcome at the KL International Airport at abour 7.30am.

Despite having failed to net the gold medal, Chong Wei is still considered a national hero after putting up a gritty display against Lin Dan before losing 21-15, 10-21, 19-21 in the men's singles final on Sunday. 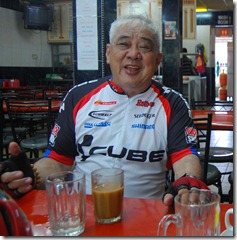 While the younger generation get excited over the return of Chong Wei, a former Olympian is set to make his way to our Parliament at noon.

Former national cyclist Ng Joo Pong is expected to meet Minister in the Prime Minister's department Nazri Aziz at Parliament. It remains unclear to what brought about the meeting.

Joo Pong is a reminder of how sporting heroes are easily forgotten. Having made the nation proud in the 60s, many do not remember who Joo Pong is or how he looks like.

But it indeed heart warming that some have taken the liberty to document Joo Pong's journey. The picture above was taken from Malaysia Sports History while the second picture was taken from Pearlz of Tots.