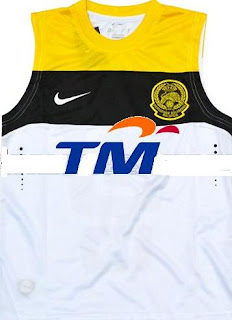 UPDATE (10.59pm): Obtained an email from a leading figure in the fraternity.

"Good article in your blog on TM Logo on the Malaysian Football Team's playing attire. TM is NOT a SPORT ATTIRE manufacturer like Adidas, Nike, Puma, etc. As such the TM Logo cannot be on any sport teams attire. It is as simple as that. Unfortunately, Malaysia sports attire agents, etc, have no guts to bring up this rule. The problem is not TM or FAM, but S%^&*@*(#$. They have really no sports ethics."

Note: Fifa does not allow sponsors logos to be on national jerseys during international tournaments. Read here for a better understanding.

Q: TM goes into a sponsorship deal with FAM. The deal will see TM’s logo placed on the Nike training kit of the national team.

A: No issues I guess.

Q: adidas goes into a sponsorship deal with FAM. The deal will see adidas' logo placed on the national team’s Nike training kit.

Why? Because adidas sells sports wear.

But what if TM – who are no longer just communications experts but also sells the Team Malaysia Panthera jersey to the public – goes into a sponsorship deal with FAM and places its logo on a Nike training jersey.

Should the fans buy a Nike jersey? Or a TM Malaysia Panthera jersey?

Or just settle for a Grade A imitation jersey worth RM40?

Note: Pic of training jersey is not the official image authorised by any party.

HD says: That aside, TM should be commended for supporting Malaysian football.