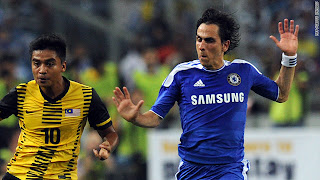 The FA of Malaysia (FAM) issued a statement after English club Chelsea FC lodged a complaint of alleged racial abuse towards Israeli player Yossi Benayoun (pic) during a friendly match in KL recently.

The chants received coverage worldwide as it was reported by CNN and AFP among others.

The statement by FAM was made yesterday - a day after Malaysia were booted out from the World Cup qualifiers.

Chelsea responded by saying "the matter is now closed", as reported by the BBC.

Below is the statement by FAM.

With regards to the above matter, the Football Association of Malaysia wishes to issue the following statement:

The FA of Malaysia have received a complaint from English Premier League side Chelsea FC over alleged racist abuse targeted at Israeli midfielder, Yossi Benayoun, during a friendly match with the Malaysian XI in Kuala Lumpur on 21st July 2011.

From our initial observations, if such an incident took place, it would have involved a small section of spectators at the match and this surely does not reflect the feelings of the majority of fans in this football loving country.

The FA of Malaysia would like to strongly register that we do not condone any form of racism in football. If such an incident did happen, we would like to apologize to the player concern, and also to Chelsea FC.

HD says: Way to go FAM. Say no to racism - especially in sports.