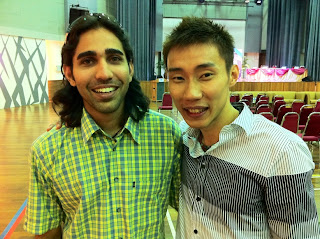 I could picture that title on the hardcover of Lee Chong Wei's much anticipated book.

I remember speaking to someone during the Malaysia Open earlier this year about efforts to document Chong Wei's achievements and life story in a book.

And I learnt a lot from that particular individual.

Apparently, there were already plans of writing a book on Chong Wei by members of his fan club.

However, the Penangite said there should be less of his personal life and more of his badminton achievements documented. It was supposed to be done in a simple manner and published in three different languages - Bahasa Malaysia, English and Mandarin. He wanted the book to be cheap so that it will be easily available to school kids.

Suddenly, another party came into the picture with arm twisting tactics and hijacked the whole project. Chong Wei was apparently left with no choice but to say yes.

Or a true story?

The Star's Rajes Paul - who celebrated her birthday last week - reports about Chong Wei's new autobiography that is set to hit the market soon.