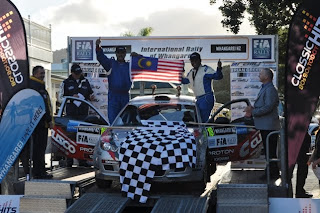 The heavy rain and low temperatures did not stop Karamjit Singh from winning the 2WD category of the International Rally of Whangerai, New Zealand on 15-17 July.

He emerged fourth overall in the 4th Round of the Asia-Pacific Rally Championship.

"Tyre choice and driving tactics were important in these conditions which were mostly fast flowing winding stages. It would have been easy to have an incident and be off," Karamjit said.

It was even a proud moment for local car manufacturers Proton as Karamjit was powered by a Satria Neo.

The next race is the Rally Hokkaido in Japan which starts on September 30.