August 11, 2012
It got many excited as London Olympic bronze medalist Pandelela Rinong is 'finally' on twitter. 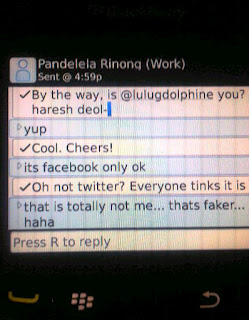 With a picture of her and her favourite nickname as her handle (@LuluGDolphine), one would have expected the Sarawakian lass to have stepped into the world of Twitter.

However, a quick check by the author proved otherwise as evident in the exchange of SMS-es (pic).

Harimau Muda A coach Ong Kim Swee has several 'pages' on Facebook and Twitter. He has denied having set up accounts on any social platforms.

Parody accounts are common as even former Works minister and MIC president Samy Vellu is also seen on Twitter.

So the next time you follow, like or request to add someone from such social networks, do some homework before blindly acknowledging. Otherwise, there could be a serious form of misrepresentation that could offend many in return.