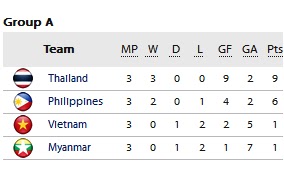 It was a pleasant surprise to receive a phone call from Jakarta late last night. The call was made by a good Indonesian friend Gaib who is attached with Jakarta's Sindo Radio.

The SindoSport programme wanted a few words from me about the state of security and the Malaysia-Indonesia AFF Cup Group B match at the National Stadium in Bukit Jalil tonight (kick off 8.45pm).

I was later interviewed by SindoSport anchor Ita Kusuma as we spoke about the security at the stadium and healthy rivalry between fans of both countries. I also reminded Ita about the 2011 SEA Games incident where our players were forced to leave the Gelora Bung Karno in Barracudas.

That aside, we agreed that the Media should play peacemaker and not ignite the sentiments of fans from both nations.

After the show, Gaib had this to say; INA-MAS with love. Media itu mendinginkan bkn kompor!

So who will join Group A's Thailand and the Philippines in the semi finals?

All will be answered tonight.