Who will join Singapore in the AFF Cup final? 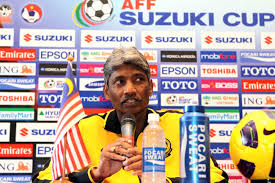 The solitary goal of the match was scored by Khairul Amri in the 19th minute and the Island nation advanced to the final with a 1-0 aggregate (after having managed a goalless draw in the first leg clash in Manila on Saturday).

National pride and personal sentiments aside, it remains unclear if both teams deserve a place in the semi finals to begin with .

Nevertheless, Singapore did thrash Malaysia 3-0 in the curtain raiser at Bukit Jalil - Malaysia's worst defeat to their neighbours on home soil. Also, the other teams have failed to live up to expectations as many now question the standard of play in the region compared to the 2010 edition.

That aside, the Harimau Malaya squad will now take on Thailand in the other return leg semi final in Bangkok tonight (8pm). Both teams were tied to a 1-1 draw in their first battle at the National Stadium in Bukit Jalil on Sunday.

It has been an interesting 'war' between both teams. From laser beams and a poor pitch at the National Stadium to the Malaysian team forced to train on a bad training ground in Bangkok - such instances will surely have a psychological effect on the players.


The question remains - who will triumph in the coming 90 minutes? Will the Malaysian Tigers clash again with the Lions in the two legged final (Dec 19 and 22)? Or will the War Elephants march into the final with aspirations of winning their first silverware after a long time?

National coach K.Rajagobal (pic) "didn't like the scoreline" against the first match against Singapore and hoped his lads will "meet Singapore in the final".

His wish could come true.

Meanwhile, do read Rajagobal bares it all.